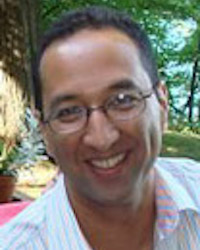 David Bough, Jr. is a board certified Otolaryngologist. He received his Bachelors Degree in Economics from Dartmouth College, his Masters Degree in Physiology from Georgetown University, and his Medical Degree from Jefferson Medical College. In 1994, he completed his residency in Otolaryngology-Head and Neck Surgery at Thomas Jefferson University Hospital in Philadelphia. He has had additional training in the use of lasers, the treatment of voice disorders, head and neck cancer, and endoscopic sinus surgery. He was the first Otolaryngologist to perform Balloon Sinuplasty in both Bergen and Rockland counties and continues to be a leading pioneer in this breakthrough technique. He was one of the first in the area to embrace Coblation Tonsillectomy Technique and Pillar Implantation. He has particular interest in caring for patients with thyroid and parathyroid disease, nasal and sinus obstruction, sleep disorders, and snoring. Dr. Bough has authored numerous articles in the medical literature and has lectured at several local and national meetings. He maintained an academic affiliation as an Assistant Professor at Jefferson Medical School from 1994 -2005. He currently has an academic appointment as an Assistant Clinical Professor at the Mt. Sinai Medical Center in New York. He is a Fellow of both the American Academy of Otolaryngology and the American College of Surgeons. Dr. Bough has served on multiple committees including the Nominating Committee of the Bergen County Medical Society, the Medical Executive Committee, the Surgical Control Committee, the Infection Control Committee, the Standards Committee, and the Bioethics Committee of various local hospitals. He maintains full privileges at The Valley Hospital, Hackensack University Medical Center, Good Samaritan Hospital, Nyack Hospital, and Surgicare of Ridgewood.